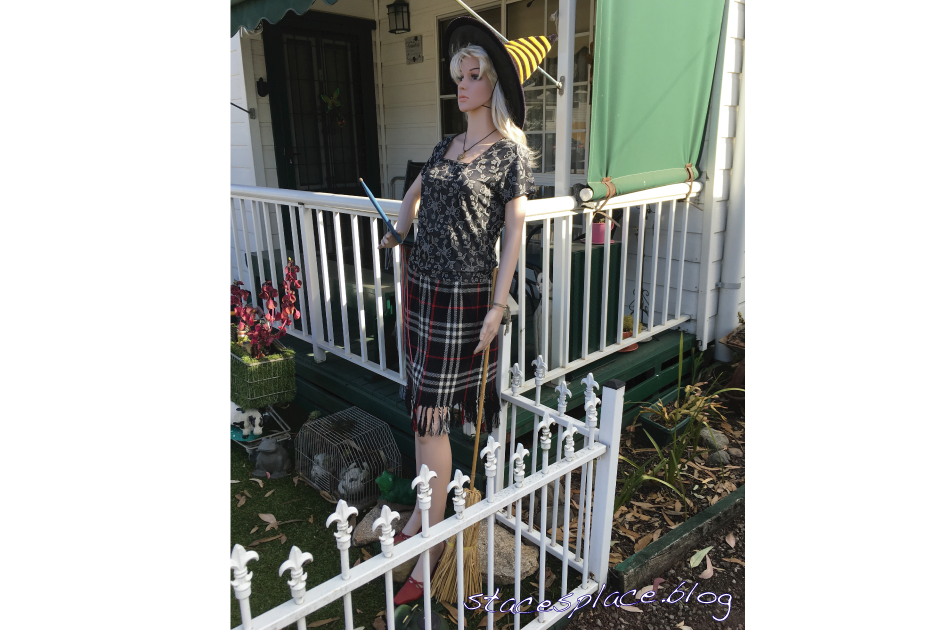 Willow stands silent and still in a front yard at the end of the main street. Obviously once a model, but her black dress, changing with the seasons, her pointed hat, broom, and a wand grasped lightly in her right hand suggest another occupation now, perhaps touching on the occult. Her presence always attracts attention, sometimes with approval, sometimes with a smile, sometimes with a little superstitious fear and trepidation, sometimes a lot of superstition and judgement leading to complaints and requests for her removal. Mostly though curiosity. Why? Why is she there? What does she represent?

Willow has a carer, let us call her Kay, in whose yard Willow unflinchingly stands her ground in all kinds of weather, day and night, without respite. It is Kay’s story that is inextricably bound to Willow and in which we may find some explanation of Willow’s presence.

Kay’s parents, Ray and May, separated and divorced when Kay was quite young and Kay has only a few fond memories from this time with her Dad. Childhood demons can make monsters of even the most mild mannered men and as Ray’s demons reached a crescendo he could no longer provide a safe, secure, family environment for May and Kay. Ray disappeared into the bowels of the city where over time he did at last find the means to contain the demons, if not defeat them entirely.

May and Kay also moved elsewhere to limit the possibility of Ray finding them again. May found happiness with another man with considerably less demons and Kay found the stability we all require as children.

As Ray finally emerged from the fog he did try to find May without any success. But he thought his luck might have changed when he happened to meet May’s dad in the street one day. When quizzed about May’s location, her dad proclaimed that he had lost touch with her as well and had no idea where she was. This was of course a little white lie that May’s dad thought might protect May from Ray.  Gradually over time Ray gave up the search particularly when he met and married another woman who already had two daughters.

Kay the happy country girl grew into an even happier young woman when she gave birth to a beautiful child. Her step father had by this stage passed away and the newly widowed May surprised Kay one day by suggesting that she find Ray and for an even more surprising reason, that this might be his only grandchild. A spark of love for Ray was a still a constant heartbeat within May.

Armed with this amazing revelation Kay set out to locate her long lost father. Ray had now divorced again and had retired to a small farm further up country where Kay eventually located him. He was ecstatic to meet Kay again and his daughter and his grandson began to spend weekends with him. Kay’s love for this new version of her Dad just blossomed. Gently Ray brought up the subject of meeting May again which Kay duly conveyed back to her mother. To Ray’s utmost joy, May accepted the invitation and began to visit the farm on weekends. Many fun and laughter filled weekend visits ensued.

On one of these joyous weekends as they all relaxed on the verandah after dinner and watched the sun set in the west, Kay spotted an old broom stuck in the rafters of the verandah. On asking her dad why the broom was there Ray responded with;

“Oh that’s just an old one we keep here for when your Mum visits and doesn’t want to get her good townie one dirty”.

It was just that, a old man’s throwaway line, an attempt at humour born out of nothing really but it was to become the basis for an ongoing family joke about who was a witch and who was a warlock and all manner of crazy word associations with occult subjects. There was never any serious contemplation of the occult, it was just one of those delightful bits of whimsy that become our fondest memories of family life. It was never revealed how the broom got there of course.

Sadly Ray passed away leaving May and Kay bereft again. But the whimsy lives on with Willow and her constant reminder for Kay of those happiest of times spent with her Dad and the love she continues to feel for him. Willow is simply love.